Photo of ‘Vargas herd’ elephants in the Rose Bowl parade. From the Buckles Blog.

There’s a piece in the Guardian about the massive slaughter of African elephants to feed a seemingly insatiable ivory export market in East Asia (but also in the West…). The story quotes Jane Goodall, who is advocating for a worldwide ban on ivory sales, as the population of wild elephants plummets from poaching, and tusks are smuggled in containers of floor tiles, sacks of dried fish, and diplomatic pouches.
Goodall is coming to DePauw University to speak this coming Spring; it will be a fantastic opportunity for our students to meet someone on the front lines of research and conservation for over 50 years. She will also be in Pasadena on New Year’s Day as Grand Marshal of the 124th Tournament of Roses. That’s where this story gets curious.The Tournament of Roses is an event that features a grand parade of flowered floats (including roses, of course), marching bands, and other entertainment prior to a major American college football bowl game (this time featuring Wisconsin vs. Stanford). The original name of the football contest was the “Tournament East-West Football Game,” emphasizing the ambition of burgeoning California communities to match or surpass the traditions (and weather conditions) of their eastern American cousins. 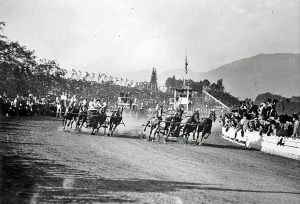 Chariot Race at 1911 Tournament of Roses

The Rose Bowl stadium in Pasadena that serves as the current focus of events was built in 1922, but before then events were held in Tournament Park, and supported by temporary grandstands for spectators, just as all amphitheatrical shows in Rome were held in ad hoc wooden structures until the Amphitheater of Statilius Taurus was built in 29 BC (later to be replaced by the Amphitheatrum Flavium, a.k.a., the Colosseum by Vespasian in the 70s AD).

The study of Gen. Lew Wallace, author of Ben-Hur, in Crawfordsville.

Football was only played once, in 1902, before a hiatus of 14 years, during which chariot races took the place of gridiron football. The idea for chariot racing was inspired by the production of Ben-Hur on Broadway at the turn of the 20th century (here’s the souvenir program from 1900). We sometimes take students to visit the General Lew Wallace Study and Museum just a half-hour up the road in Crawfordsville, IN, where he built a richly appointed study, the ultimate “writer’s cabin“, built with the royalties from Ben-Hur, the best-selling American novel of the 19th century. As it turns out, the continuing popularity of the novel and stage play (which had over 6000 performances until it closed in 1921) inspired an unauthorized movie production of the story in 1907 which led to a lawsuit, and the first copyright protection for authors from infringement by stage or film adaptations.

There is some historical strangeness in the fact that Goodall will feature in the 2013 spectacle, since as we’ve seen, the early organizers of the Tournament of Roses consciously revived many aspects of Roman grandiosity. The Roman pompa might well be the most prominent ancestor of modern parades, and the Romans were not notable for their kindness to animals, elephants included.

The first time Romans paraded elephants was in 275 BC, after the defeat of the Epirote king Pyrrhus in Southern Italy. James Grout has a whole page dedicated to elephants in Roman spectacle, and he provides many of the translated sources. I’d like to focus on one well-known episode from 55 BC, and it involves Pompeius Magnus (‘Pompey the Great’). In 61 BC, Pompey had celebrated his third triumph (the triumph was a special honor granted by the Roman senate to a victorious general of a particularly significant campaign; Mary Beard has done the comprehensive study of it), and soon afterwards began his most audacious building project–the construction of the first permanent stone theater in Rome.

Burge and Packer reconstruction of the Theater of Pompey

A gift to the citizens of the city and a victory monument to himself, Pompey’s structure effectively formed an eighth (man-made) hill in Rome. It had the stage and some 20,000 seats for shows, a built-in Temple to Venus Victrix, and a large quadriporticus out front with gardens and water features, full of Greek art treasures (both plundered and copied)–it was a popular gathering spot.

It also loomed over triumphal procession routes (I’m being purposefully vague here; as Beard as shown, it is unlikely that there was ever ‘one route’, but the size and position of the theater would have made it visually unavoidable for any parade being prepared in the Campus Martius). Ever after, any successful general would have to pass by, and be overshadowed by, Pompey’s monument. In 55 BC, Pompey won his second consulship, and celebrated the inauguration of his theater complex with a big bash.

Cicero was at the party–he had to be, for the sake of politics. But as he explains in a letter to Marcus Marius in October of 55 BC (Ad Familiares 7.1), he would rather have been somewhere else. For the last part of Pompey’s five-day beast-hunt extravaganza, Cicero tells us:

“The last day was the one of the elephants, on which great wonderment on the part of the common crowd was present, but no enjoyment at all. Rather, even a certain compassion ensued, and general sentiment was of this sort: that this beast has some kind of fellowship with humankind.”

We get corroboration from other, later sources (Seneca, Pliny the Elder, Plutarch, Cassius Dio), which share a theme: the anthropomorphization of the elephants by the spectators. The Elder Pliny says (8.7.20):

“When, however, the elephants in the exhibition given by Pompeius had lost all hopes of escaping, they implored the compassion of the multitude by attitudes which surpass all description, and with a kind of lamentation bewailed their unhappy fate. So greatly were the people affected by the scene, that, forgetting the general altogether, and the munificence which had been at such pains to do them honour, the whole assembly rose up in tears, and showered curses on Pompeius, of which he soon afterwards became the victim.” (Bostock’s 1855 translation [for now]).

Even the Roman mob could sometimes be moved to empathy for the contrived suffering of a noble creature. And the Elder Pliny seems to see some cosmic justice in the fact that Pompey would soon be dead as the result of the civil war that arose out of the obsessive push for power by the Big Men of the Late Republic. But buyers of elephant ivory today do not have the opportunity or the obligation to see the cost of their desire up close. Would their attitudes or habits change if they did?

Nick Brandt’s photo of a family of elephants, a day before they were killed on 28 October, 2012.

Postscript.
At the 1913 Tournament of Roses, inaugurated to celebrate the “Mediterranean of the West,” the event organizers held a special race featuring a camel vs. an elephant. At least on that one occasion, the elephant won.