Princeton University Press has launched its iPad app version of the Barrington Atlas of the Greek and Roman World, as we noted here on Oct. 31. The app has been made available for $19.95 on iTunes. The Barrington Facebook page includes recent news and reviews about the release. Princeton provided a copy of the app for this review. Testing was done on a 4th-generation 128 GB iPad running iOS 7.0.4 after a clean restart.

When the print version of the Barrington Atlas was published in 2000, the fruit of a multiyear international collaboration, it redressed a problem that had bedeviled the latter 20th-century: a lack of up-to-date, accurate, and visually informative/attractive (yes, I link those two attributes) maps for the classical world. Murray’s Small Classical Atlas, a short but distinguished accomplishment of Victorian cartography popular in schools, had seen its last update in 1917 (though reprints appeared through the 1950s).

The efforts of van der Heyden and Scullard (1962) and Hammond (1981) were useful as references, but their visual qualities (too few maps, and those reduced to atopographic colored line-drawings in the former; sepia monochrome in the latter) left much to be desired. The Facts-on-File Cultural Atlases released from 1980-1990 (“Greek World,” “Roman World,” “Egypt,” and “Mesopotamia and the ancient Near East”) were examples of the encyclopedia-style that prevailed in that decade, with lots of insets, photos, short descriptions, timelines and essays — an integrated approach that had many merits, but which were ultimately limited in sheer cartographic utility.

What we were missing (which we often found ourselves consulting as graduate students) were 19th-century productions such as Findlay’s Atlas (see the PDF here), or Butler’s Atlas (here at Project Gutenberg), which married visual consistency, clarity, and topographic detail. Above all, we worshipped the achievement of Carl Müller, responsible for much of the research and production behind many of the maps for Smith and Grove’s Atlas of Ancient Geography published by Murray in 1874. (Richard Talbert told this story in Imago Mundi in 1994; he also characterized Müller’s “comprehensive vision of the physical and cultural landscape of classical antiquity” in a review article of 1997 [American Journal of Philology 117, p. 323]. Smith and Grove’s original volume, which lost money for John Murray, has now been reprinted.)

These were maps with the uncanny ability to tell you what you wanted to know at a glance (general location, geographic position, political affinities, chronological attributes, key relationships to other major features or sites), and which helped to clarify your next questions, rather than leaving you frustrated at minimalist cartography. They were also works of art in themselves.

Reasons for the ‘death of classical mapmaking’ between the 1950s-1990s included a reaction, by the New Archaeology (‘Processualism‘), against a Cultural-Historical Archaeology that sometimes reduced the ancient world to a series of neat ‘period maps’ in which one seemed to be able to track the ‘spread of civilization/empires’ from one part of the globe to another. That justifiable response to over-simplification was abetted, in the 1980s, by a nascent shift to digital publishing processes that for a while made it overly difficult or expensive to reproduce large, high-quality, detailed color maps. Ultimately it was technology that came to the rescue, in the mid 1990s, of the problem it had help cause, with the maturation of GIS (Geographic Information Systems), detailed satellite and digital image processing capabilities, and cheaper, better color printing.

So it was a timely challenge that Richard Talbert and the Ancient World Mapping Center undertook in the 1990s (as he describes in the Preface to both the printed and iPad versions). The need was longstanding, the technology was ready, and the expertise and will had been gathered. The result was certainly a success; the Barrington Atlas is now the standard general map reference in the field. (For a contemporary review of its strengths, weaknesses and potential, see S.E. Alcock, et al., Journal of Roman Archaeology 14 [2001].)

In an age of increasingly instant and portable knowledge, however, the Barrington Atlas had a problem — at 12.8 x 18 inches in size (necessary for the cartographic detail) and just over eight pounds in weight (necessary for the broad geographic coverage), it was not easily moved. Furthermore, its printed price approaches $400, which means that it is generally affordable only by libraries, which in turn due to its size and cost will understandably not tend to lend it out, but keep it in the reference collection.

These days there is a general unwillingness to pay much of anything for the production and dissemination of knowledge (which has led to a revolt against corporate ‘content providers’ while at the same time undercutting support for the academics expected to do the work). So the Barrington Atlas App, which addresses all the shortcomings of the printed version, is about 1/20 the cost. That still puts it at a ‘premium’ price point in the App Store, which may be wise, since it genuinely has quality, enduring content to offer. While it is unclear whether Princeton will get its money back from the digital production, the App certainly ought to extend and expand the life of the Barrington Atlas project.

So what particular features does the App offer, and how are they implemented? Finally, what opportunities have been missed on this new platform, and how might a digital ancient atlas become more powerful and empowering?

A touch on the splash screen (see the first image in this review) reveals a left-hand slide-out menu with five different options presented cleanly in an iOS 7-compatible style: Introduction, Maps, Locator, Gazetteer, and Help.
The Introduction includes all prefatory material about the production of the book — 33 pages of citation, explanation and reference. An index icon at the top right leads to an embedded table of contents for the introduction, while a slider bar at bottom allows more precise navigation. Swiping in the middle of the screen (not at the edges) turns single pages skeumorphically.

The Maps button leads directly into a browser for the collection of 103 full-color maps, presented in numerical order and with a slick transparicized mirroring effect below each map. Scales used are:

These maps are presented exactly as they are in the printed text, with a few enhancements. A tap on the screen reveals a top menu with icons of a key and a compass. The key opens a hierarchical map key for chronological designations, cultural and natural feature categories, printed type styles, orthographic conventions for sourcing ancient names, and scale and elevation conventions. This key shows a digital advantage over the paper version, offering quicker access to important metadata conventions. The key slides out at right, covering part of the map, but the map can be moved (at least as long as it is zoomed in slightly) so that a feature or typeface can be compared directly with the key.

Tapping the compass icon reveals a second compass at the center of the map as well as thumbnail views of adjacent maps (though not the larger-scale urban hinterland maps), which serve as navigational shortcuts, and a convenient way to explore a region. Tapping the central compass icon re-orients maps to north at the top of the iPad’s screen, but only if those maps are not already so oriented. Finally, a ‘Back’ button returns to the previous map (showing as ‘Maps’ when going back to the map browser).
There are some navigational issues in the Maps view; buttons can be sticky, unresponsive, and pinch gestures may too easily zoom out to the map browser. There are also stability issues; at least twice, in my experience, standard navigation crashed the program or device. Finally, after switching to another app, the Barrington Atlas App does not hold your ‘place’. You have to start from scratch each time.
The quality of the images, however, is wonderful. When zooming in (up to 400%), rendering is generally quick and smooth. If one pays attention to the information built into the styles and symbols (and revealed by the key), a wealth of data about ancient classical landscapes emerges. It is fun to explore. 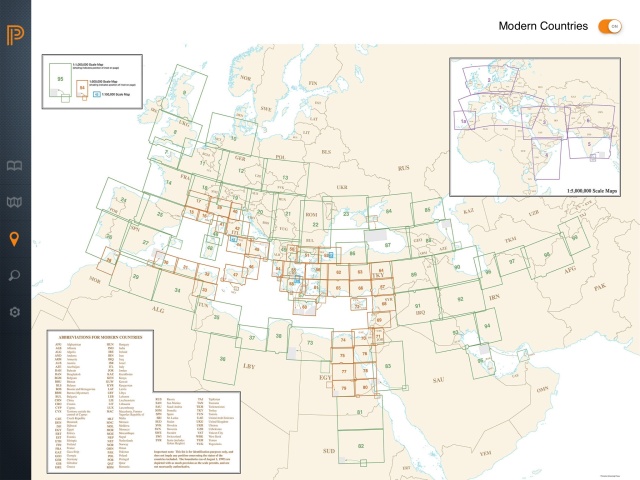 The Locator button presents the large orientation map showing the numbered outlines of all individual maps in the Map view. Tapping one acts as a shortcut, with the larger-scale urban hinterland maps thoughtfully layered ‘over’ the others so as to permit access in the Locator (which itself cannot be panned or zoomed). The ‘Back’ button in this mode reverts back to the orientation map.
The Locator view also has a toggle turn on/off the boundary lines of modern nation-states (at least as they stood in the year 1999).

The Gazetteer provides some helpful functionality. It permits easy searching of ancient place names (you have to use the ancient, not modern name, but it begins to return search results as soon as you type, so you can catch your mis-spellings). The list of results provide shortcuts to the maps themselves, and even zoom to the specific place location (centered as much as possible in the screen). Favorite search results can be marked by a ‘star’ icon and accessed in a list on the right-hand side. It is simple, elegant, and it works.

The bottom option in the main menu provides Help. This includes a two-page overview of functions and gestures, followed by four pages of credits.
* * *
In effect, the Barrington Atlas App is a more functional, faster, cheaper, more easily carried and used version of the paper original. Pages won’t get worn, folded, faded, or stained with coffee, and if you drop your device, you can always re-download the app on a new one.
But the idea could be taken so much further. The Barrington Atlas App is effectively the ‘end of the line’ for the traditional printed atlas. Already there have been some efforts to build digitally on its foundations (e.g., The Digital Atlas of Roman and Medieval Civilizations and the exciting collaborative, open-source efforts of Pelagios and Pleiades). But the future is not on the desktop; it is in our hands, in the field and classroom.
What should a 21st-century ancient atlas app do? Here’s a minimal wish list. Developers: a call to arms!

Imagine the power such a research and teaching tool would have. Geographic literacy for students and the general public, in a highly global, highly mobile world, has never been more important. The Barrington Atlas App is the last analog stone in a very old, very long cartographic path. It is wonderful for what it is (and to be fair, it does not claim to be anything else). We should be grateful for the editors’ accomplishment.

And now it is time to dream, and build, much bigger.

One thought on “ROMARCH: Barrington Atlas of the Greek and Roman World iPad app; Review”